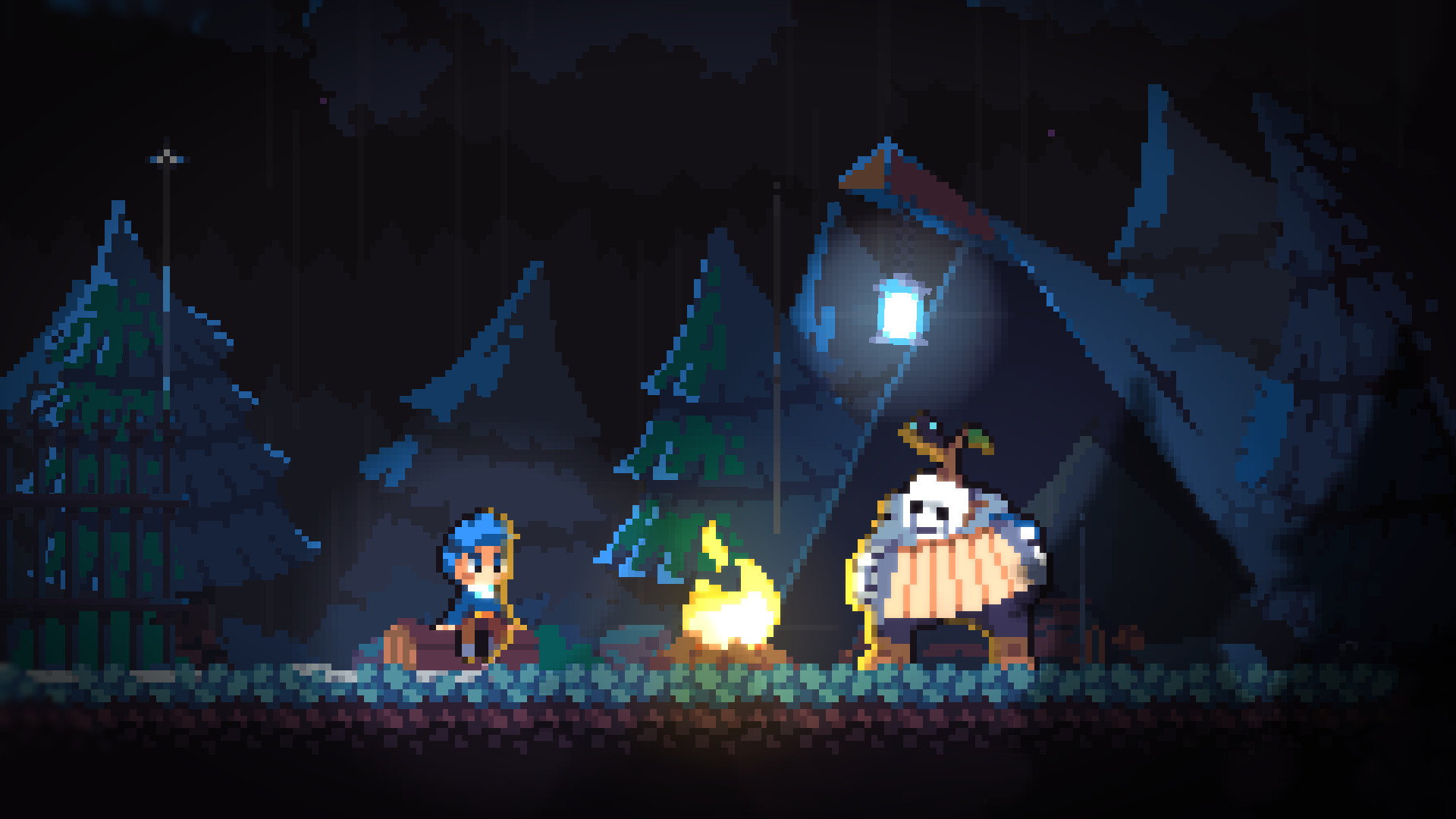 In danger of falling under the radar, Revita is a roguelike on the Nintendo Switch worth knowing about. The sweat and tears exerted by the single individual development team can be felt throughout the experience that gets much more mileage than meets the eye. The fast paced twin-stick platformer doesn’t reinvent the wheel when it comes to roguelikes but it’s a game that will definitely appeal to fans of the genre.

A child with a mysterious past

A quick prefatorial level is set as the introduction to a nameless child seemingly doomed to repeatedly climb an ominous clocktower to simply die at the hands of an evil entity. After each death, the child awakens upon a subway tram to be dropped off at a mysterious hub world at the bottom of the tower. Little is known of the child outside of this setting and the majority of the storytelling is through the cast of characters that the child rescues as they work their way back up the clocktower. As is the case with many roguelikes, the story is really meant as a backdrop for the progressive nature of the combat. It’s just enough story on each run to keep things interesting but not enough to keep people going until their Switch batteries wear out.

The game has to be fun, right?

The main draw of Revita is the excellent roguelike repetition of procedurally generated levels with some very smooth and satisfying combat mechanics. The path towards the spire of the clocktower consists of multiple floors with five distinct areas. Each floor is essentially a kill room: the child exits the elevator, survives the enemy wave, and then re-enters the elevator to continue onto the next floor.  The first dozen or so floors share a similar theme, whether it be a grass motif or your typical ice stages. Each set of floors generally contains a potential reward in each of the rooms, along with some hidden rewards that are found in secret ways such as shooting out walls. The procedural generation of floors provides some nice random elements but for the most part the levels feel pretty similar. It felt like in many cases the platforming part of the combat gets forgotten as many of the kill rooms have little to no platforms.

At the end of the phase of floors awaits a boss, very much in your typical Mega Man style of combat where victory is earned by figuring out the attacking pattern and counter attacking. The bosses are fairly well paced, with each one becoming easier to defeat on subsequent runs. The one exception being the fifth boss which felt like a significant spike in difficulty when compared to the previous. Even with additional resources being available on later runs, the overall difficulty of the game skews towards being harder than most. The initial kill rooms eventually become easy enough to survive but the last few bosses never seem to become any easier.

Movement of the nameless child feels great and new unlockable weapons have enough variety to encourage experimentation. Speed and jump distance feels very on par with traditional 8-bit style games and a double jump which is triggered by an attack is a nice inclusion even though it typically isn’t necessary for survival. At the beginning of each run the child will pick from a weapon cache that expands with time. From a single shot gun, to a machine gun, to even a rocket launcher that can self damage, the wide variety of weaponry does a good job of varying up the gameplay.

The main advertising point of Revita is the glass cannon style progression as each new upgrade along any given path requires a sacrifice of the little health given. It’s certainly an interesting concept, by sacrificing defense, you gain offense. In a practical sense, what this does is provides a large incentive for the player to make clean runs through the kill rooms. As enemies are defeated, the child can restore lost health whether it be from getting hit by an enemy or trading it in for an upgrade. The upgrades don’t always feel so significant. Trading a heart could mean a 10% increase in damage or weapon range. In the short run it feels like an unfair trade off but as each upgrade compounds, it certainly pays off higher up the clock tower.

Particularly important for a Roguelike

The most important aspect of any roguelike is the replayability factor, and Revita does a good job of encouraging players to keep trying. New characters can be unlocked from within the clocktower and will take up residence in the hub world or on the metro tram to provide additional benefits on later runs, at a cost. The cost is either coins that are acquired upon death based on the number of enemies defeated, or these mechanical parts that I never did figure out how you obtain, they just seemed to accumulate each run. One neat thing about Revita is even when you do complete a playthrough to the end, the world still has secrets to discover. Hidden areas can be found by completing certain tasks, perfect for anyone looking for more content even after completing the initial challenge.

The Nintendo Switch has so many roguelikes at this point that it’s incredibly difficult to predict which end up making a big splash. All try to distinguish themselves with some sort of hook, and very few manage to stand out over the crowd. With Revita, no single feature particularly stands out. It’s simply a well developed roguelike that’s fun to play. Revita is a great starting off point for newcomers to the genre, or a comfortable few hours of fun for afficandos.