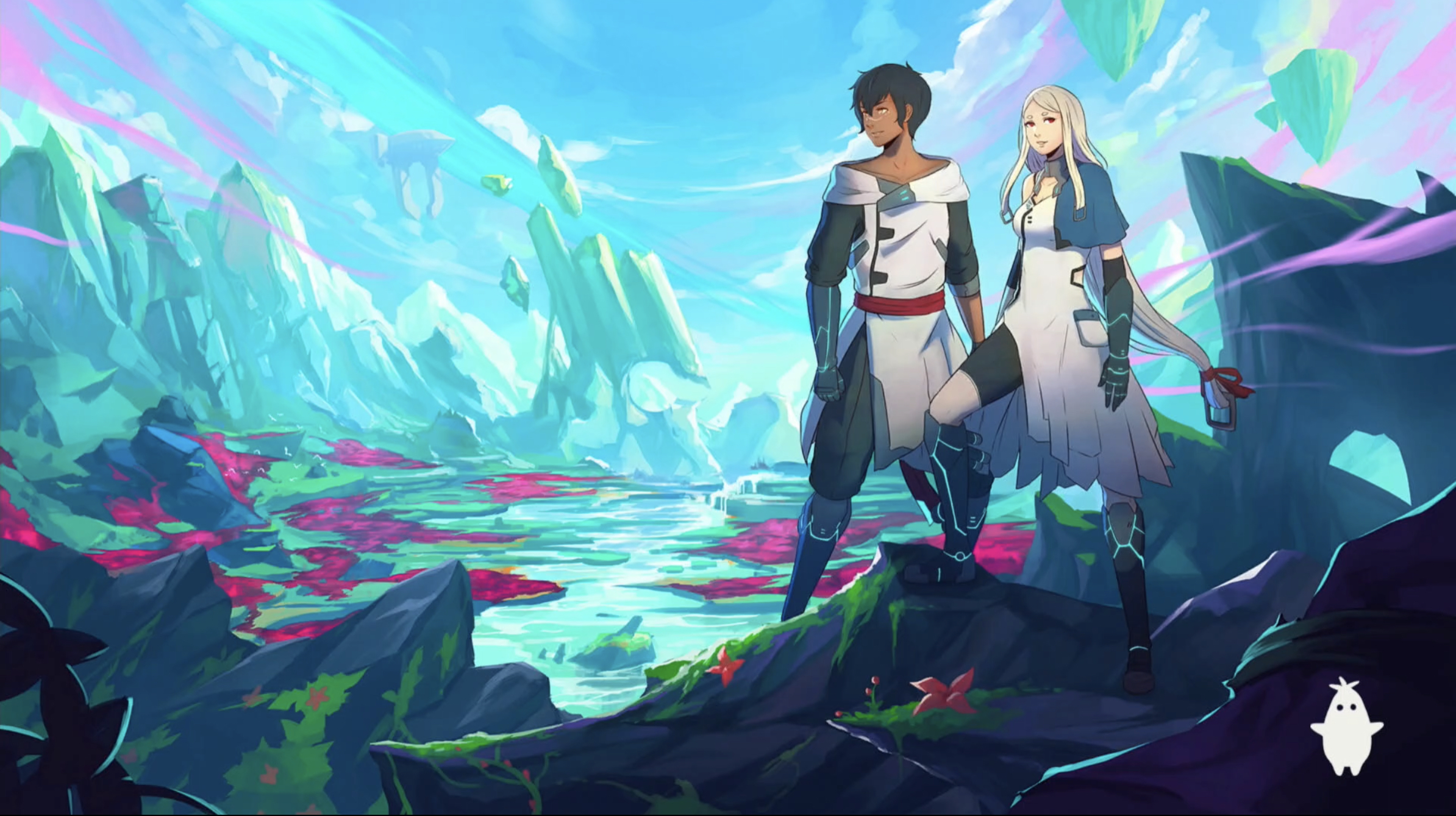 From developer The Game Bakers, creators of Furi, comes Haven, an action-exploration game with strong narrative elements, light turn-based combat, and a focus on co-op. If that sounds like a mouthful, let me put it more concisely: Haven is incredibly unique. It’s reminiscent of classics like Thatgamecompany’s Flower and even Nintendo’s Splatoon, in a way. The premise of two runaway lovers fleeing an archaic and restrictive homeworld to find their own respite, their own safe haven, is an interesting one, and even though the combat elements and overused environments hurt the overall experience, Haven will still very much find and satisfy its audience.

Off the bat, let me point out that the game is clearly designed with co-op play in mind, as two players can each take on the role of one of the protagonists: Kay and Yu. On a single controller, many of the actions you take require that you focus your attention both on the d-pad and the face buttons, but more on that later. Given that the narrative and dialogue between the characters has such an emotional impact, it’s easy to see just how much enjoyment a couple would derive from seeing the 8-10 hour story through to completion. An accessible base difficulty and options to make the game easier ensure that anyone can get into and fly through the entirety of Haven.

The story begins with the two lovebirds having escaped their oppressive home and found a new one on the seemingly deserted and lost planet named Source. Their ship, affectionately referred to as the Nest, is incredibly cozy, and upon entering it the perspective shifts to first-person, from the third-person used elsewhere in the game, giving the impression of living right along side or at least being afforded an intimate glimpse into the new lives of Kay and Yu. In their ship, you can cook food and eat food to earn some experience points and fill up a hunger meter. You can craft items to use in combat, curatives to use at camps or in the Nest, and sleep to restore some health and turn night into day. Other actions include taking a shower, celebrating with a drink (the game’s method of cashing in EXP to level up), and just chatting.

Outside the ship, where you’ll spend most of your time, Kay and Yu glide around different map sections called islets, each with various points of interest, such as flora and fauna. Plants can be gathered as meal ingredients, friendly creatures can be interacted with (yes, you can pet the lizard-looking thing), and bands of blue light called Flow can be absorbed so that you can distribute your own Flow to clear up a substance called Rust that takes over Source’s wildlife and spreads across its fragmented world. This is where the comparison to Splatoon comes in: gliding around as if on a hoverboard and using Flow to clear up rust feels a little like covering an area with ink, except you’re removing the ink, so to speak. Collecting rust lets you craft bomb-like items and tonics that speed up your turns in combat, and clearing an islet of Rust allows you to fast travel back there.

The world of Source isn’t all that large—it comprises about 20 separate islets—but you’ll need to navigate through the same spaces multiple times as you seek out new areas and then return to the ship with parts to put it back together, which ends up being one of the primary goals of the game. Unfortunately, this is where the repetition comes in; there are really only three different types of environments, and even these are quite similar. Often, you’ll just be flying across hills and valleys that look the same as one islet over. A radar you’ll acquire somewhat early on does help, but it’s not uncommon to feel lost when every time you turn around you see the same cliff face or the same bridge to another islet. One obvious counter to the repetitiveness of Source is just how spectacular the art style of Haven is. The skies change color as time passes, and even the small islets have some incredible vistas overlooking a vast, star-filled space. An atmospheric soundtrack by Danger really ties together the game’s exploration and helps with the monotony of the tasks you complete most, like foraging for fruits and collecting/clearing Rust.

Combat can largely be avoided except for a few story-related encounters, and I suppose your milage my vary with regards to how much you enjoy it. As a solo player, it can be difficult to pull off the albeit simple attacks consistently, unless you’re someone who can pat their head and rub their stomach at the same time. Kay is always controlled with the d-pad and Yu with the face buttons, and you perform actions by holding down a particular button until a meter fills up, which is when you can release the button to perform a beam or physical smash attack, for example. Your other three options are to shield, pacify (which soothes and removes an enemy from combat if their HP is depleted), or use an item. By performing the beam or smash simultaneously, both characters will perform a duo attack for more damage. The most frustrating aspect of the combat is just how often your moves can be interrupted, even if you’re in the middle of performing the action. If you’re using an item and you don’t complete the action, you just lose the item. It sucks. Later enemies require that you stun them before doing major damage or that you shield to avoid their devastating blows, but my advice is just to run away from enemies before they engage you (to my knowledge you can’t run away once a battle begins).

All in all, Haven is a charming and endearing story of two people who have found and cultivated a meaningful and intimate relationship. By the end of the story, you’ll more than likely have grown attached to Kay and Yu; it’s easy to sympathize with what they’ve been through and the troubles they face on Source. Adding to the effectiveness of the characters is some truly fine writing and voice work to match. It’s a relief to see that the PlayStation 5 will be home to both massive AAA open worlds and more compact and emotional story-driven games as well. The power of love, not teraflops, is the most notable feature of this early release.

Wrote a thesis on video games, which confirms that school is cool. I read, watch, play, study, talk, etc. Follow the blog for more.