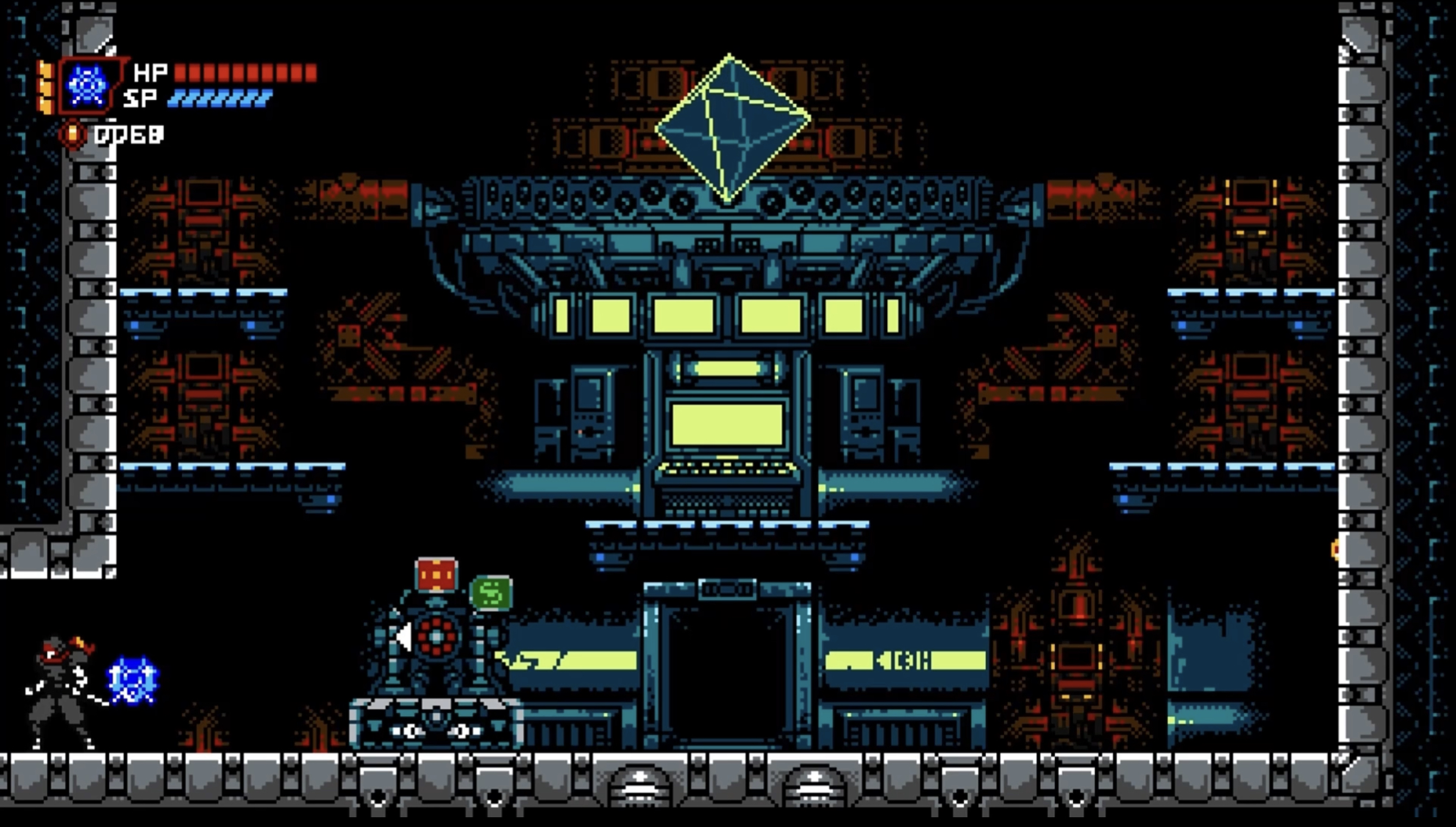 Not gonna lie, the research lab features some particularly frustrating sections that likely will take a few tries to get past. Don’t try to help the poor soul grasping for life in the first room, a robot will explode out of it and try to attack you. In the next room, a wall of goo blocks passage. The wave blasts can be avoided but now is a good time to get used to the reflection mechanic since it will be required soon enough. When a enemy attack is next to Shadow, quickly push the D-Pad and attack button simultaneously to reflect the attack back at the goo. It’s best to try it out a few times to get the timing just right because it will be important later in the game.

Right after the wall of goo, a missing section in the wall in the top left corner provides a path to another health tank.

The next few sections are a real test of reflexes and accuracy. A hard to see line of goo triggers an expanding wall to chase you through the corridor and destroy Shadow if caught. The first few times aren’t too bad as it really is just a matter of moving at a reasonable pace. The main point of frustration is on the fourth run. The wall comes at you pretty quick and the floor is covered in spikes, meaning you have to jump on the moving ledges in order to avoid death.

Another wall will chase you right after the first, get to the ledge right before the goo wall that shoots at you and you’ll be safe. Here’s where learning the reflect ability pays off. Unless you have a full special meter, reflecting the enemy attacks is the only way to proceed here.

A brief interlude occurs when Shadow drops into the liar of giant android having a bad day. After a one hit defeat, more story is revealed through a dream sequence as Shadow shakes off the attack. Another room with another wall to chase you precedes the actual battle with the android.

The pattern for Subject Alpha goes likes this: A large fireball shot followed by jumping to the opposite side. This continues until the boss decides to pause in the center and shock the ground causing a ripple attack on the floor. This pattern continues until half the health is gone and then the boss adds a second laser blast that comes with the fireball. Just stay in the center, jumping over the blasts and then attacking, and then jump and move when the stop at the center.

The next few sections are pretty easy, just avoid the spikes on the floors and walls and a health tank awaits as a reward on the main path before the end boss.

Subject Alpha returns, this time as a monstrosity growing from out of the wall. This boss is actually pretty tough. At the outset, Alpha will shoot a fireball at Shadow that travels along the ground, as well as spawn an enemy that attacks. Dodge over the fire when it hits the ground and take out the spawn before trying to get a few licks in. After this repeats three times, Alpha drops a mine on the ground that adds spikes to the floor, as well as spawns an additional enemy. Clinging to the wall is the only way to avoid the spikes. This pattern remains consistent throughout, so continue dodging and attacking until Alpha is defeated.