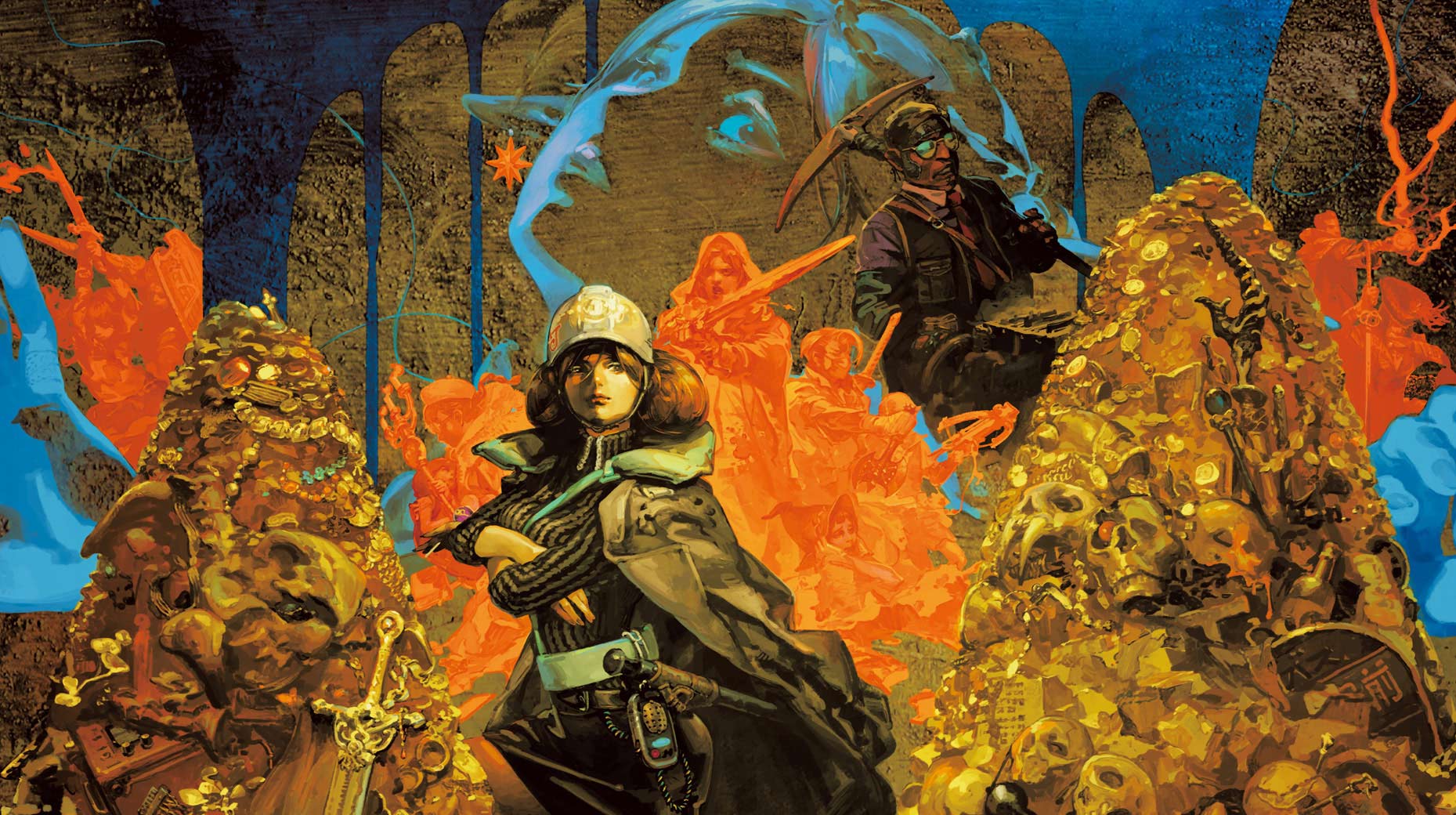 Dungeons hold riches.  For decades, players have been forming parties and delving into deep caverns and twisted catacombs in the never-ending quest to acquire loot and become empowered.  From the days of Wizardry to modern adventures like the Etrian Odyssey and Mary Skelter series, the promise and peril of dungeon-crawling has gripped players with their mixture of repetitive gameplay and incremental progression.  Dungeon-crawlers aren’t enjoyed by everyone, but for those that love to grind through enemies and explore every inch of a level, the genre offers extensive spaces of familiar mechanics and a steady drip of dopamine that reward the constant work and determination from the players.  The dungeon-crawling genre is one where the enjoyment comes from the time and effort the player puts into it, making it off-putting to some but addicting to others.

Undernauts: Labyrinth of Yomi, from developer Encounter Inc., takes the classic mechanics of dungeon-crawling and infuses them with a clever reflection on the capitalist nature of the genre itself.  In 1979, a massive megastructure suddenly appears in Tokyo.  It is quickly discovered that the megastructure holds valuable resources, leading to a massive corporate scramble to train and equip employees to delve in and mine the structure for resources before their competitors.  Players work for the Cassandra Company, one of the many corporate entities competing for the riches the structure holds.  Because of a labor shortage, the company goes through illicit means to hire anyone available, including the youth and convicts, treating them as disposable resources in the corporate quest for never ending growth.  Players take the role of a foreman for the Company and lead their rag-tag bunch of ill-equipped and untrained employees into the labyrinth.  The game begins with a catastrophe for the Cassandra Company, leaving players stranded in the labyrinth with no hope of escape other than to delve deeper into the structure to obtain enough riches and resources to survive and hopefully find a means to leave.

As a foreman for the Cassandra Company, players must recruit a pool of workers to use to work in these literally hellish conditions.  Players create characters to form a party of six workers, and the variety of jobs and skills available is impressive.  The job system is flexible and offers quite a bit of depth, allowing players to upgrade and switch jobs as the game progresses.  The party members are organized into a frontline of vanguard characters and more-protected rearguard characters, typical of the genre.  Once the party is formed, players head into the labyrinth to fight monsters in traditional turn-based combat, talk to NPCs, solve puzzles, and explore to find opportunities for more resources.  Quests, combat encounters, and discoveries lead to item and equipment drops to pair with experience gains, and the game provides a steady balance of rewards and experience to keep players powerful enough to survive the horrifying labyrinth.

Yomi, the labyrinth itself, is the star of this game.  Intricately-designed, the labyrinth is a sprawling, deadly complex with plenty of mysteries propelled by an intriguing narrative that will keep players hooked.  A unique feature in Undernauts is the ability to construct the means of progression through the labyrinth.  As the players are literally miners, the game quickly provides items to open new areas in the labyrinth that will lead to even greater resources and more potent dangers.  Players gain the ability to create doorways in walls, build ladders to go to upper and lower levels, build bridges to connect areas over waterways, and so on.  In order to build these and continue progressing in the labyrinth, players will need a resource that creates the items that are used to build within the labyrinth.  Almost all items and equipment in the game can be scrapped for this precious resource, giving players an easy way to dump old gear and equipment to prevent inventory bloat.  Undernauts offers an immensely satisfying gameplay loop of dungeon-delving, returning to upgrade equipment and cash-in resources for labyrinth-building options, and diving back into the labyrinth to continue the grind and open up new areas to explore.  Random encounters occur at a very low frequency and monster encounters are identified by color to tell players whether or not they will lead to treasure drops, which provides a nice way to plan a course of action and not become frustrated by too many combat encounters.  Quality-of-life features such as auto-travel, a well-designed and labeled map, frequent and appropriate auto-saving, and an item that allows players to immediately return to their base-camp help make the grinding work more approachable and well-suited for quick bursts of play.

The combat in Undernauts is rock-solid traditional turn-based combat.  Formation of the party is important, so players should put their tank and fighter characters in the front and healers and ranged-attackers in the rear.  While the traditional combat is solid enough with plenty of spells and abilities to combat the many enemy types that stand in the way, the game introduces a “Switch Boost” system that adds a fun layer of strategy and tension.  There are four boosts the players can use:  one increases attack power and makes any special maneuver or spell available without costing action points; one increases defense and provides a small health replenish; one that provides the chance for double treasure drops if the combat encounter is finished while it is turned on; and one that replenishes the boosts for use during combat.  Proper use of the boosts adds a nice level of additional strategy, especially against more difficult enemies and bosses.

The world of Undernauts is grim and oppressive.  This is a mature game with horrifying creatures, graphic images of death, and twisted and hellish characters you’ll encounter.  Not many games build themselves around the idea that “work is hell,” but Undernauts takes the concept to extreme levels.  While the game offers some quality-of-life features that make it a more approachable entry to the genre, the oppressive theme, critique of capitalist structures, and prevalence of graphic imagery is purely for adults. This is a game where one early quests tasks players with finding body parts scattered around the map to toss into a pit to awaken a boss character.  As the players are literally trapped in a nightmare hellscape, the graphical appearance of the dungeon itself is dark and oppressive, and the monsters and characters encountered are twisted and macabre.   While the graphics of the dungeon are simple, the color palette combined with the sound-design do enough to sell the labyrinth as a grimy, dirty, and dread-inducing environment.  Character and enemy art is absolutely gorgeous, even if they are disgusting creatures. Corporate propaganda messages accompany players on their quest via messages from a one-way phone system that allows players to receive “inspiring” corporate messages but not call for help from the company.  Thanks, boss.  Overall, the game won’t win accolades for its graphics, but overall the aesthetics do an excellent job of creating the theme of being trapped in a hellish landscape at the mercy of a ruthless employer.

Undernauts is a great fit on the Nintendo Switch in handheld mode.  The simple, but effective graphics work well on the small screen, and the daily grind of dungeon-delving is a perfect fit for the portable device.  Some of the text can be a little too small at times, and the game conveys most of the necessary information through text and could have used some better iconography to understand the game’s systems.  The menus are functional if inelegant, and in the beginning it is a little confusing which menus lead to what system (for example, the “Equip” menu does not lead to equipping characters; the “View Chr” is where that is done) and the basic tutorials do not provide any visuals to help comprehend the game’s mechanics.  While the menu systems are a bit unintuitive at first, with play they become more usable and do not detract from the sprawling experience.

Undernauts: Labyrinth of Yomi is now available on Nintendo Switch, PlayStation 4 & 5, and Xbox One and will be available for PC on Steam on November 4.  This review is based on the Nintendo Switch version with review code provided by publisher Aksys Games.