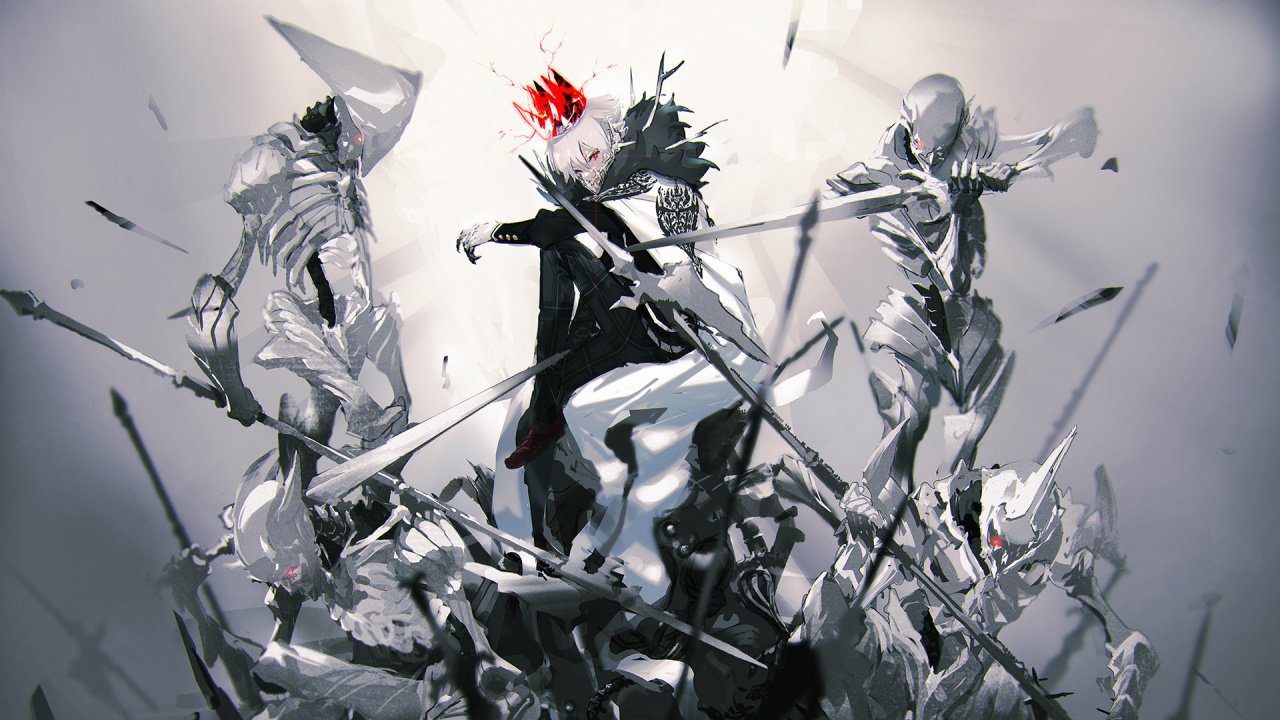 Generally speaking, I loathe when a review spends more time talking about past titles rather than focusing on the subject at hand. But in some cases, the inspiration behind the design is so heavily influenced by a particular source that it would be a disservice not to discuss it first.

So let’s get the comparisons out of the way early.

Persona 5 may not have invented the formula of a high school drama where teenagers inherit special powers and have to save the world from demons from another dimension, but it’s become the most famous example. And the story of Monark, for better or worse, replicates the formula to a staggering degree. The story begins with a protagonist attending an academy, transported to another dimension with a friend, surrounded by strange demons thirsty for blood. In order to protect their friends, the hero makes a pact (contract) with a Monark (Persona) in order to obtain the power necessary to defeat the Daemons. Individuals who align with these Monarks are called Pactbearers (Phantom Thieves) and each has a different power depending upon the Ego of the individual and the Monark that feeds it.

After surviving the initial encounter, the hero meets up with the dean of the academy who explains that the portals to the Otherworld (Metaverse) can be accessed via a mist that spreads throughout the academy when a Pactbearer uses their power. Individuals with more nefarious intentions have made their own pacts and innocent students are dying while they abuse their power. The hero agrees to save the academy by entering the mist created by each Pactbearer and severing their link to the Monark by destroying their ideals. The ideals are strong feelings that are represented by three crystals that need to be broken in order to take away the power of the Pactbearer and remove the mist from the academy. Oh, and the portals to the Otherworld are opened by accepting a call on a cell phone.

Early on, it’s very difficult to ignore the similarities with Persona 5. As the story is set up in the first few hours I found myself rolling my eyes several times at just how obvious the inspiration is. Thankfully though, once you acknowledge the surface level familiarity you begin to realize that the inspiration is only skin deep and that gameplay distinguishes itself from the Atlus flagship. No demon fusing, No relationship mechanics. The actual gameplay is quite distinct and breaks down into two main phases: a semi-horror film based exploration sequence and a real-time strategy combat system.

In order to defeat each Monark, the hero must find portals that give access to the area in the Otherworld where the connection between the Monark and Pactbearer exists. Each Pactbearer inhabits an area of the academy where a mist grows as they use their power. The hero enters the mist-filled sections of the academy searching for clues on the precise location of the portal that will lead to the connection that can be broken. What this looks like in practice is that the hero has to explore an area, discover clues and hints embedded in the area and use them to figure out how to access the Otherworld. As an example, one of the early areas features a safe with a four digit combination that holds a key to a locked door where the portal to the Otherworld awaits. A single clue insinuates that the combination to the lock is the final four digits of a certain student’s ID number.

Many of the puzzles are quite clever, requiring critical thinking and resulting in a pleasant feeling of accomplishment after figuring out the solution. Other puzzles are so opaque and difficult that I was banging my head off the wall and will send most folks running to find a guide in order to progress. In the end, the solutions always make sense, but for a select few, they require such careful attention to small details in objects or items that they could easily be missed. In the age of infinite guides online, this shouldn’t present a problem for those willing to seek help and the euphoria of finally figuring out how to proceed is real.

Once the portal is found, the second phase of gameplay involves defeating a host of enemies in order to destroy the connections of the Pactbearers and their Monark. The hero is placed into a battleground area full of skeletons looking to prevent the destruction of the connection. Combat feels much like a Fire Emblem game, or maybe even Trails of Cold Steel where plenty of space is available to move around and use different abilities to defeat the opponents. Each member of the party gets one turn to move and select an action, and then the enemies get to take their actions afterwards.

Early in the game the combat feels very basic. Actions are limited to a handful of basic attacks and debuff abilities with victory typically earned by chaining actions together with the party members. It doesn’t take long though  for the combat to evolve as after each successful battle spirit points are earned that can be then used to purchase new skills and abilities. Once different forms of magic are unlocked and special combat modes become available, victory can be earned in an infinite amount of ways. Some incredibly wild combinations of attacks can be utilized to defeat enemies and discovering new and inventive ways to win battles is an absolute joy.

Instead of using magic, the currency for special moves is a madness gauge that builds up after each use. Once the gauge is full, the character becomes a juggernaut that can knock out enemies and allies alike with a single hit, whoever happens to be within arms reach. Some of the most fun is finding ways to abuse this mechanic by causing a character to go into madness and then using the main character’s power of resonance to spread the madness across multiple enemies and watch them decimate each other. The combat in Monark is incredibly complex and that’s not even considering that the battlefields are littered with traps that can be used as an advantage as well.

Monark can be just as hard to read as its signature puzzles that can cause so much frustration. The story structure feels like a thousand other JRPGs, but it’s the fine details where the game distinguishes itself and provides a unique experience. Whether it’s trying to figure out the clues to solve the puzzles, or trying to figure out the best strategy to get through a particularly tough combat phase, each new moment feels like a battle.

The amazing thing about these moment to moment battles is that they always end in euphoria and rarely cause fatigue. The sense of victory that comes from figuring out the next location to explore or that final blow on a boss always provides a boost of energy before the next challenge. In every way possible, Monark succeeds in providing an amazing experience that always keeps you on the edge of your seat.