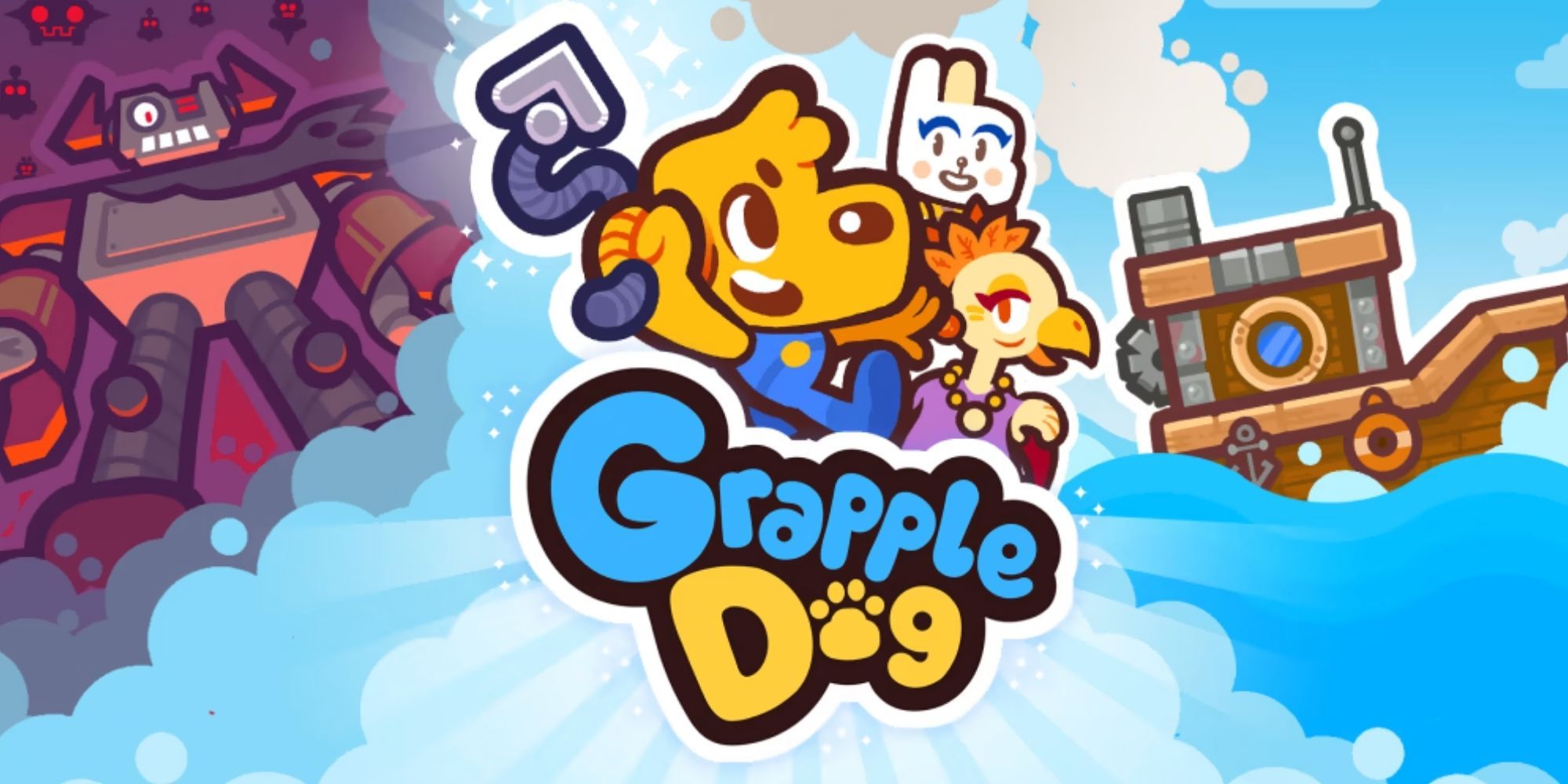 Known for creating physical editions of indie games for Nintendo Switch, Super Rare Games takes its first step as a independent publisher. Developed by Medallion Games, Grapple Dog is a unique 2D action-platformer released on both Steam and Nintendo Switch. With brisk levels and terrific accessibility options, Grapple Dog is an easy game to pick up and play as a primary game or even as palette cleanser between longer titles.

The story begins with a village struggling to get by until an inventor comes along to improve the lives of the villagers using technology. Things go well for a short time until the inventions begin to run amuck and an army of robots turn against their former masters. It’s now up to Pablo, a heroic video game loving dog to save the world by peacefully stopping the robot lord, Nul. The story is a cute backdrop for the platforming action and provides positive feelings for the tough moments to come.

Pablo saves the world by collecting purple gems throughout each level in order to unlock access to the end-of-area boss. Each level is designed with platforms and traps that Pablo has to run, jump, and grapple his way through. Most levels focus on traps such as spikes and rely on quick thinking and precise button pushing to keep Pablo alive. Collecting gems is fairly simple with most of the challenge centralized on defeating the bosses. Some of the bosses are quite difficult but thankfully an option to turn off damage will never prevent progression.

Unsurprisingly, the main mechanic of movement is a grappling hook. Pablo can run and jump but levels are designed with different objects and obstacles designed to utilize a hook that shoots out using the “Y” button. A short tutorial section provides some instruction and room to move around but getting the hang of using the hook is fairly intuitive. The movement of Pablo feels smooth and precise but at times the hit detection can feel a little off. During jumps, Pablo turns into a ball and often he’ll take damage from certain enemies when it seems like they didn’t touch. On a few occasions obstacles don’t fully render and a few deaths occurred thanks to semi-invisible spikes.

A few other annoying bugs include the music not turning back on after restart and some accidental restarts due to a lack of conformation for the button in the menu. The music bug is particularly annoying because the soundtrack is quite good. Each level has music perfectly suited to the environment and starts off strong early and peaks with the bosses theme that gets the blood pumping with it’s energetic beat.

The replayability factor is high because each level has collectables that require multiple attempts to find. Some collectables unlock bonus games that are fun to play and provide extra gems. Between the cute graphics, enjoyable platforming, and terrific soundtrack, Grapple Dog is a great first offer from Super Rare Games and matches the spirit that the company projects with its selections of indie games.