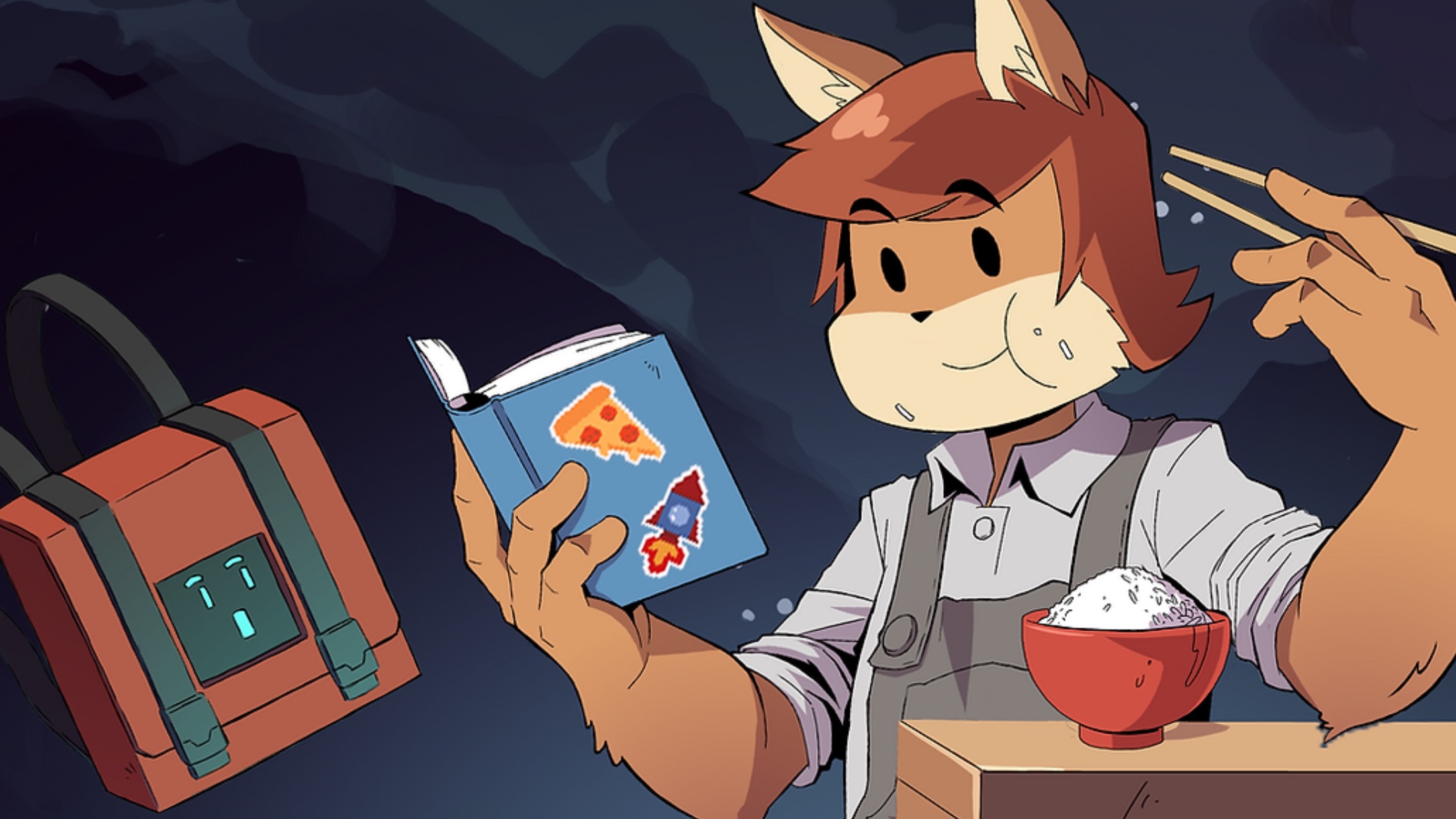 As technology improves, not only does it make game development more accessible, but it allows designers to increasingly flex their creative muscles. My initial attraction to Fixfox fixated on the neat puzzle-like mechanics of a fox fixing basic machines on a far off planet. My intrigue grew further upon learning that this cute open-world pixel game is created by a one person development studio. After playing a string of big budget games with vast and elaborate worlds, the creativity within its simplicity is just the breath of fresh air I’ve been looking for.

In Fixfox, a travelling space mechanic named Vix, and their trusty robot sidekick, Tin, receive an order to fix a specific piece of hardware on the other side of the galaxy. On the way there, bad luck happens upon the duo as they end up crash landing on the mysterious planet, Karamel. Upon exploring the planet, a whole host of kooky characters live out their lives, including a cult hellbent on ensuring nothing gets repaired, and a group of somewhat polite space pirates who conveniently have left scores of item stashes just begging to be pilfered.

The story is a very wholesome tale of people helping each other for the betterment of everyone and is a tale that can be enjoyed by the whole family. Even when not progressing the story by completing quests, it’s fun to just explore the open world and fix the broken appliances of the residents of Karamel. The banter between the mechanic and her robot assistance is quite clever and humorous, and an air of positivity is felt throughout the story. Not long into my playthrough I invited my daughter to watch and play along and we would laugh at many of the zany denizens as we went around repairing as much as we could.

Gameplay begins with exploration of the open world of Karamel, with the mechanic travelling by foot or motorbike across the terrain following on the quest path as they attempt to make the necessary preparations to leave the planet. As the duo travels around, they are encouraged to collect resources in order to help the locals repair their equipment, which is then rewarded with additional resources. The gameplay loop is essentially a very satisfying circle of finding things to fix, figuring out what materials are needed for the repairs, and then collecting or trading for those same materials or tools.

The fixing mechanics consist of a fairly simple puzzle in which the mechanic needs to figure out what tool is necessary for what problem. For example, fixing a broken vacuum cleaner may show three brokens panels. Different types may include but not be limited to: a dusty panel needing a brush to clean it, a screwed in panel that requires a flat piece of metal to unscrew, and my personal favourite, a chatterbox that requires a piece of tape to shut its mouth. As you travel across Karamel, resources are found and taken to the oracle to have their usage explained. So the first time you come across a toothbrush, the oracle will register that as a brush that now can be used in repairs.

Beyond the fixing mechanics, many locations have a puzzle aspect built in where as the player will need to figure out the correct combination of moving around boxes or unlocking doors in order to access certain areas. One early location requires the mechanic to dock into an abandoned freighter and figure out how to connect in such a way that the cargo can be transferred onto your ship. None of the puzzles are overly difficult, but that’s really not the point. Fixfox truly shines by providing a relaxing atmosphere with some low effort problem solving.

For a game created by just three people, Fixfox really does sparkle in so many ways. The pixel graphics are warm and beautiful, and the western themed soundtrack really captures the essence of the wholesome adventure. The story is a wonderfully written tale but the open world also has enough character for those who just want to take a look around. If you’re looking for an experience that’s comparable to drinking hot chocolate and eating cookies, this is it.

Fixfox is now available on Steam. This review is based on a review code provided by the publisher Joystick Ventures.