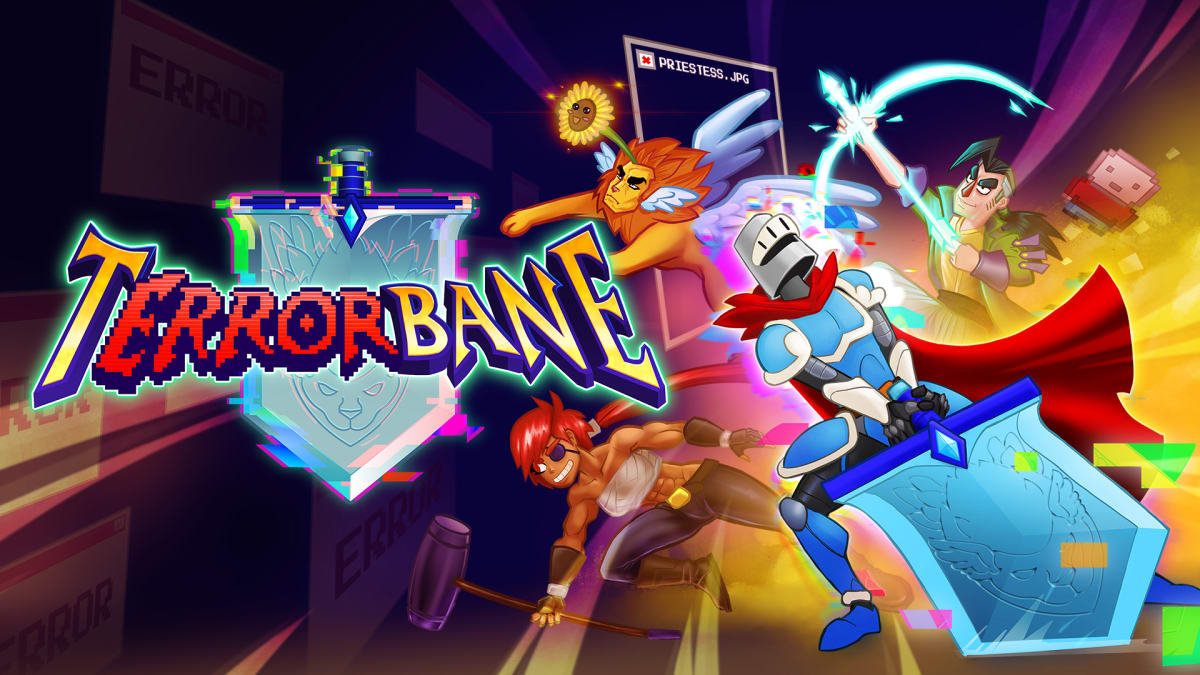 A brief meta-experience that gleefully demolishes the fourth wall.

Videogames have bugs.  It is a modern expectation that games are constantly being patched and updated to fix various bugs, balance issues, and other problems that could not be addressed prior to release.  Programming and game-design is challenging, and the ongoing dialogue between players and developers is almost a necessity in today’s gaming landscape.  tERRORbane by Italian developers BitNine Studios is a game that briefly, but energetically explores this dialogue between developer and player in a fourth-wall breaking adventure through nostalgic gaming tropes.

In tERRORbane, players play through an arrogant developer’s first project in its many  glitchy and incomplete forms.  The game mostly resembles a 16-bit JRPG, but it pulls no punches and hits pastiches of side-scrolling platformers, text adventures, DOS-era role-playing and adventure games, and even a replica of a Windows 95-era desktop screen.  No matter what genre or trope they are riffing, BitNine studios absolutely delivers on the aesthetic.  The game looks and sounds exactly like it should for the genres and technology it is trying to replicate, including an effective CRT-layer on top of the entire presentation.

The developer tasks the player with finding any bugs or glitches and noting them for him to improve his masterpiece.  What starts out as a simple bug hunt quickly spirals into an absolute destruction of the fourth-wall, where lines of code in the game are manipulated by the player and even the developer’s computer is up for the player’s manipulation.  The bugs the players find are generally hilarious and lead to wild, unexpected outcomes.  Much of the overall gameplay is essentially a scavenger hunt across the different forms of the developer’s project.

The jokes come hard and fast

Most of the jokes and references hit, and the brief length of the game (about 2-3 hours for one playthrough) keeps the experience from dragging on and losing steam.  After an initial playthrough, the game does provide a nice way to return to previous areas and versions of the game to try to find all the bugs to unlock the “true” ending and make different choices that will lead to a different main story experience.  It is still a small package, but BitNine has packed a lot of humor and heart into this brief but entertaining ride.

The brief length also helps make up for the actual game mechanics.  The core gameplay of tERRORbane is mostly that of a text-adventure with small puzzles and Wario Ware-style micro challenges spread rather thinly throughout the game.  While the puzzles and challenges are clever, they don’t offer much mechanical challenge or meaningful gameplay.  Much like the game itself, these challenges are short bursts of interactivity that do just enough to maintain momentum to the next absurd story beat.

And that design works for tERRORbane as an experience.  It is less about being a “good” game and more about being an enjoyable and playful reflection on gaming’s past while serving as a self-reflective parody of the interaction between players and developers.  The interaction between the developer and the player in tERRORbane is messy, combative, and antagonistic, but it is also thoughtful, concerned, and culminates  as a unique bond.  tERRORbane knows what it wants to be and defies convention to be an utterly unique experience.