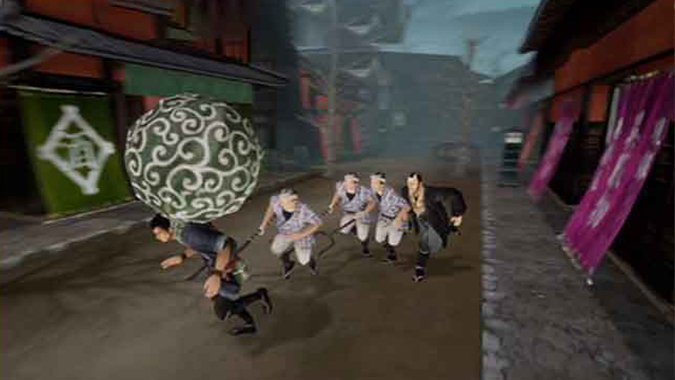 By David LloydOctober 24, 2022No Comments

Home » Kamiwaza: Way of the Thief on PlayStation Review

Japan is to video games as Canada is to hockey. Neither country owns exclusivity to their respective strength, but no other country has been able to put up any kind of consistent competition either. Often, I muse about taking classes to learn to speak Japanese as there must be thousands of incredible games yet to be localized into english. Thanks to NIS America, Kamiwaza: Way of the Thief no longer needs hundreds of hours of language training to play. It’s certainly neat that an older title receives a localization in 2022, even if the gameplay still feels like it’s from the PlayStation 2 era.

Set in the Edo period of Japan, aspiring thief Ebizo begins his Robin Hood-like career of robbery by ransacking a castle with his mentor Ainosuke. During the operation, Ebizo is flabbergasted to discover that the thieves he has aligned with are not as honorable as they appeared to be. Ebizo and Ainosuke try to flee the scene as innocent civilians are put to death until they come across a small girl who has somehow avoided massacre. Ainosuke advises Ebizo to escape with the girl while he creates a diversion, and the two manage to avoid further bloodshed. With great remorse in his heart, Ebizo decides to live an honest life as a father to the young girl he rescues and settles down as a carpenter in the city of Mikado.

A decade later, Japan enters a period of economic hardship just as his young daughter becomes ill, forcing Ebizo back into a life of crime. Using the skills learned years ago, he once again begins to steal from those more fortunate in order to afford food and medicine for his daughter. The story is both interesting and heartwarming. Dialogue isn’t overly heavy but the overarching story does a great job of providing a morally positive reason behind all of the thievery.

The weakest part of Kamiwaza is the dated graphics and gameplay. This is a game that looks and feels like the PlayStation 5 has backwards compatibility and that I’m playing right off the original PS2 disc. The visuals have been remastered somewhat so that they look a bit more crisp on a modern TV, but the blocky characters and environment look 15 years old. Though the gameplay suffers from the same dated feeling, the stealth actions available to Ebizo are pretty neat. The character can press against walls, hide behind objects and perform crazy gymnastics all in the name of avoiding detection from enemies. The main objective of the game is to loot the area until your bag is full, and then head home to both heal Ebizo’s daughter, and then sell the rest in order to provide food for the table.

As wonderful as it is to get older Japanese titles localized, Kamiwaza: Way of the Thief might be a tough sell to anyone that didn’t grow up playing PlayStation 2 era games. That isn’t to say that young people wouldn’t enjoy it. But the outdated graphics and repetitive gameplay can easily wear on anyone without a bit of nostalgia to dull the nerves.

Kamiwaza: Way of the Thief releases on Steam, Nintendo Switch, and PlayStation on October 11, 2022. This review is based on the PlayStation version with a code provided by publisher NIS America.

Does It Play On Steam Deck?