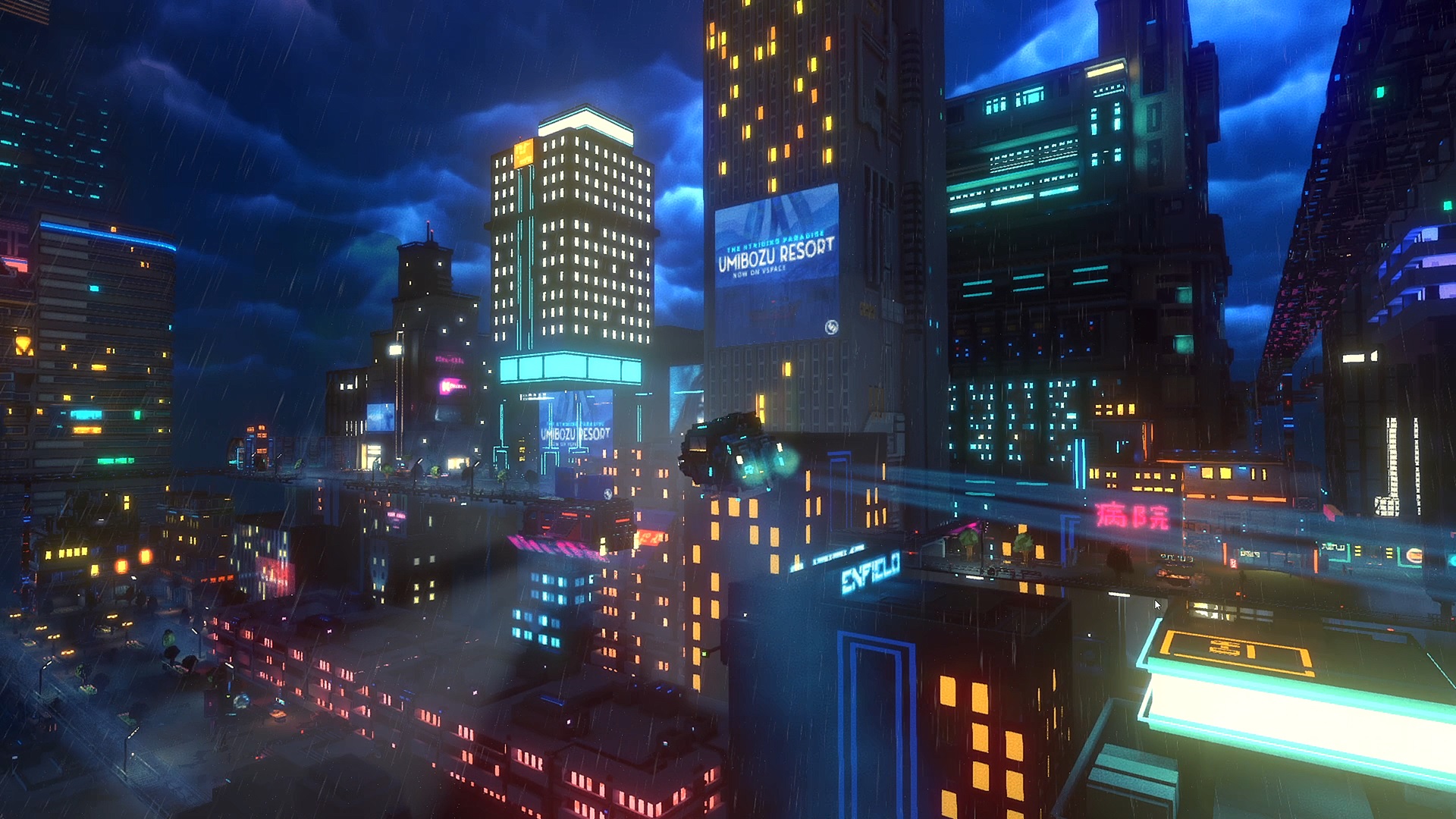 By David LloydNovember 5, 2020No Comments

Excited to immerse yourself within a dystopian futuristic city filled with neon lights, cybernetically enhanced citizens, and voxel graphics? No need to wait until December, Cloudpunk from developer Ion Lands provides a neat neo-noir experience of attempting to survive as a delivery person in a Blade Runner inspired metropolis. The bright lights and big city may be the initial draw, but it’s the fully voiced ongoing story that ultimately shines the brightest in this mostly fetch quest filled adventure.

Life in the employment of Cloudpunk revolves around Raina, a new citizen to the futuristic mega city who is trying to survive their first night as a delivery person for the pretty much illegal shipping company. The main focus is progressing through the narrative by completing missions that are assigned by a dispatch that goes by the designation of Control, a gruff older gentleman walking the line to both protect Raina and complete the shady deliveries. The assigned tasks are essentially just a series of different fetch quests. Pick up box A, take it to place B, and all the miles in between are filled with dialogue that either fills in some of the backstory or pushes the narrative further.

The missions themselves aren’t very interesting. The most difficult part of completing a delivery is simply finding somewhere to park in order to access the location shown on the map. The main motivation to continue making deliveries is to push the story further as Raina learns the history of the city and tries to survive its inhabitants. Both the writing and the voice acting are strong in Cloudpunk, and the balance between character development and story progression is quite good. Each new delivery provides a tidbit of information on Raina through conversations with either dispatch or a companion AI named Camus, who just happens to be represented as her talking dog.

The graphical presentation of Cloudpunk is quite illusionary considering the beauty of the city while driving in the hover car. The beautiful lights and detailed buildings seemingly fade away once it’s time to park the car and head out on foot. Once Raina is on the street it becomes clear that everything in Cloudpunk is built with voxels, a detail that’s easily overlooked in most promotional material. That’s not to say voxel graphics are a bad thing, most of the game takes place in the car anyway so for the majority of the time, the voxels aren’t noticeable.

One aspect of Cloudpunk that does need improvement however is in the performance. On the PlayStation version, it’s very common for a game breaking bug to occur, resulting in the need to restart the game. In some cases controls would simply stop working, at other times the story would reset back to the beginning as if the game completely restarted. None of the problems ever corrupted the save, and a patch that came after this review may address some of these issues but the lack of polish on the initial release is a tad disappointing.

Enjoyment of Cloudpunk is really going to boil down to whether or not you enjoy the story. As well developed as the characters are, the story doesn’t necessarily provide anything revolutionary or unique. The back and forth between Raina and her AI dog are often entertaining, and a few interesting personalities are met along the way, but unfortunately Cloudpunk just doesn’t quite do enough to maintain my interest.